On May 8th and 9th 2021, the University of Alabama’s Conservation Biology Society (CBS) organized a BioBlitz event at UA’s Tanglewood, J. Nicholene Bishop Biological Station. BioBlitzes are an increasingly common method of generating quick and cost-effective biodiversity data. Essentially, a BioBlitz is an event where professional and amateur naturalists document as many species as they can in an area over a relatively short period of time. Graduate students from UA’s Biological Sciences (BSC) department braved the heat, humidity, and mosquitoes to survey the forests and grasslands of the biological station to record as many different plants, insects, birds, and other biota as possible. Some members even camped overnight to record nocturnal species! 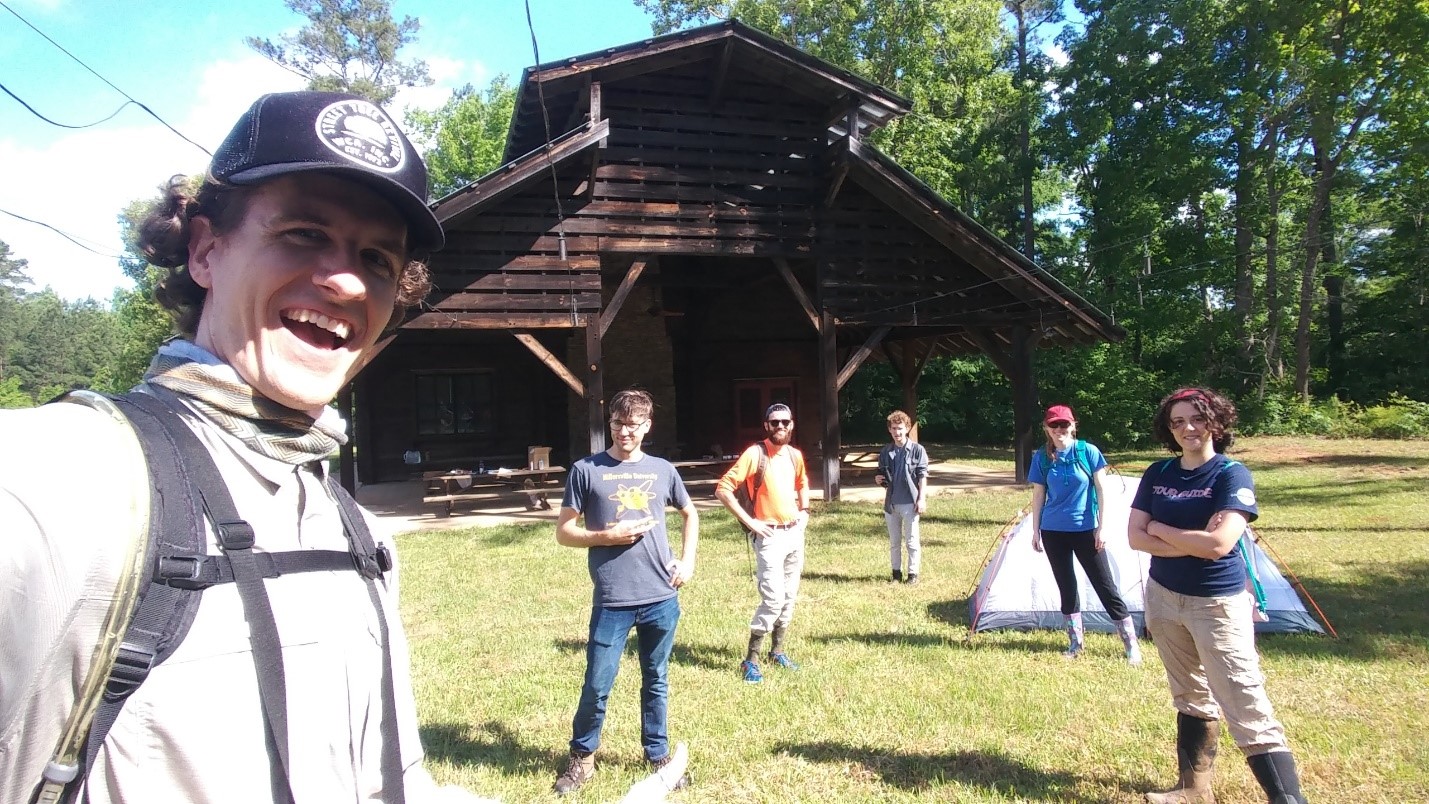 Starting at 6:00 a.m. on the 8th, the birding team hiked from the Tanglewood classroom down to Fivemile Creek while documenting birds. In just a few hours, they detected 44 bird species, including nesting White-eyed Vireos and eight warbler species. A Golden-winged Warbler, a beautiful and rare bird for the area, was the highlight of the morning!

By mid-morning, the insects were out in force and the insect team set out to document them, finding such exciting species as the American bumble bee, Bombus pensylvanicus, which is listed as vulnerable by the ICUN. As more participants arrived, specialists in reptiles and amphibians, plants, and aquatic organisms split into teams to cover different areas of the property. Just that first day, we built a list of 160 unique species on the property, including tiny Northern Slimy Salamanders, majestic Netted Chain ferns, and blooming woodsorrels.

That night, under a star-filled sky, a small group surveyed for bats using a hand-held bat scanner, listened for nocturnal birds, and set up blacklights to attract nocturnal insects. Among other things, they detected Chuck-Will’s-Widows, beautiful Luna Moths, likely two unique bat species, and a Nine-banded Armadillo before turning in for the night. 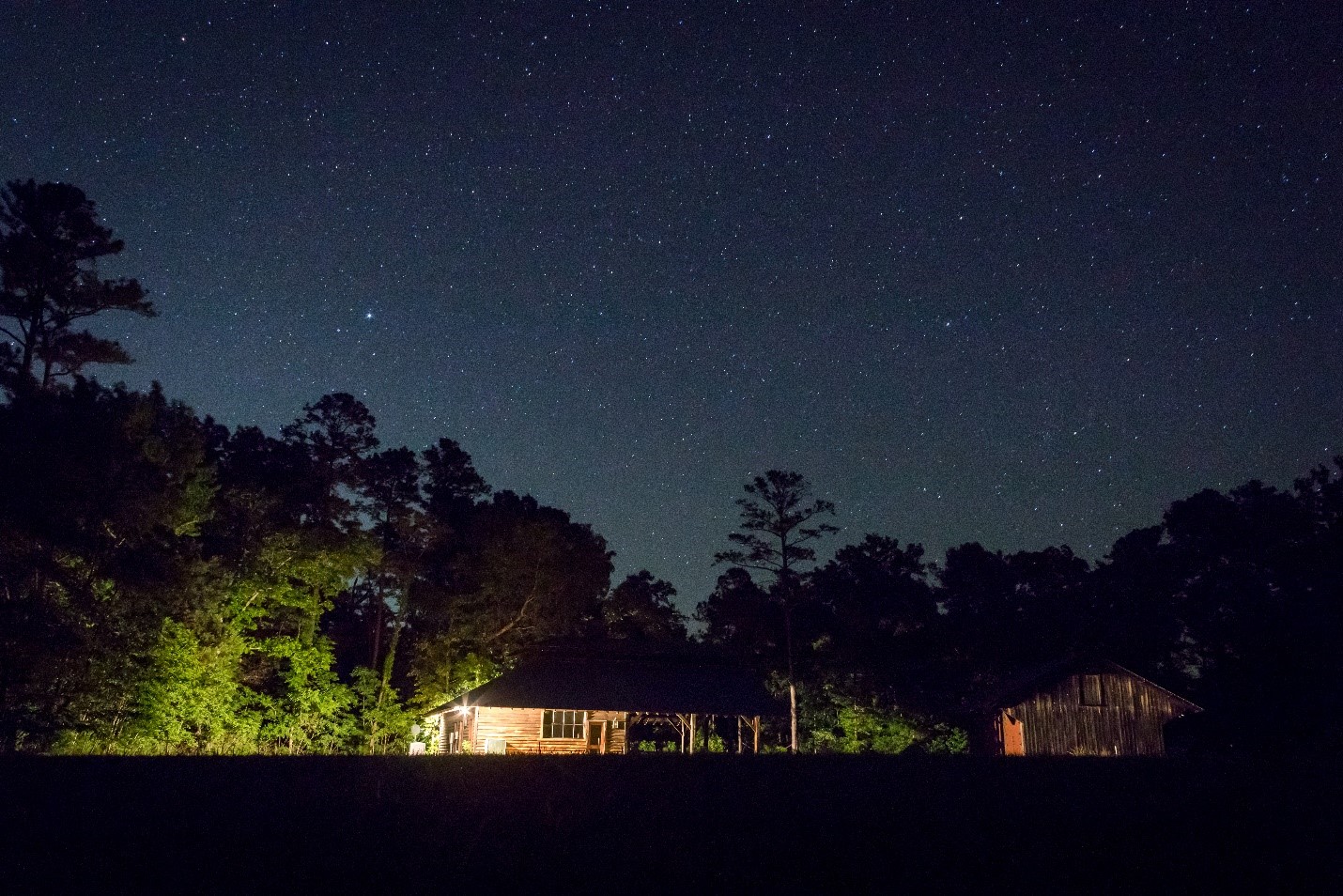 The next morning strong wind whipped through the woods, which reduced animal activity. Still, a small group of biologists persisted and made the effort to survey areas of Tanglewood that weren’t surveyed on the first day. Thanks to their efforts we observed 48 new species that were not observed the previous day.

All told, 11 people made 540 observations identifying 208 to species from 354 unique organisms over two days – an excellent census of species for Tanglewood’s records! Despite this impressive species list, this is just a snapshot of the biodiversity at Tanglewood. Indeed, organisms that are seasonally migratory or have activity periods or flowering times at different times of the year would not have been available for sampling during these surveys; future BioBlitzes during different seasons will complement this species list and provide a fuller census of the incredible biodiversity at Tanglewood.

If you are interested in participating in future BioBlitz events at Tanglewood or other locations around Tuscaloosa, or if you’re interested in learning more about our group, please reach out to CBS president Thomas Franzem (tfranzem@crimson.ua.edu) to be added to our email list, and follow us on Facebook (UA Conservation Biology Society) and Twitter (@uaconservation). You can also get involved in reporting any species you detect yourself at Tanglewood to the “University of Alabama Tanglewood Biodiversity Survey” project on iNaturalist (https://www.inaturalist.org/projects/university-of-alabama-tanglewood-biodiversity-survey) and join other CBS members in reporting any species we detect anywhere through our iNaturalist project (https://www.inaturalist.org/projects/ua-conservation-biology-society)! 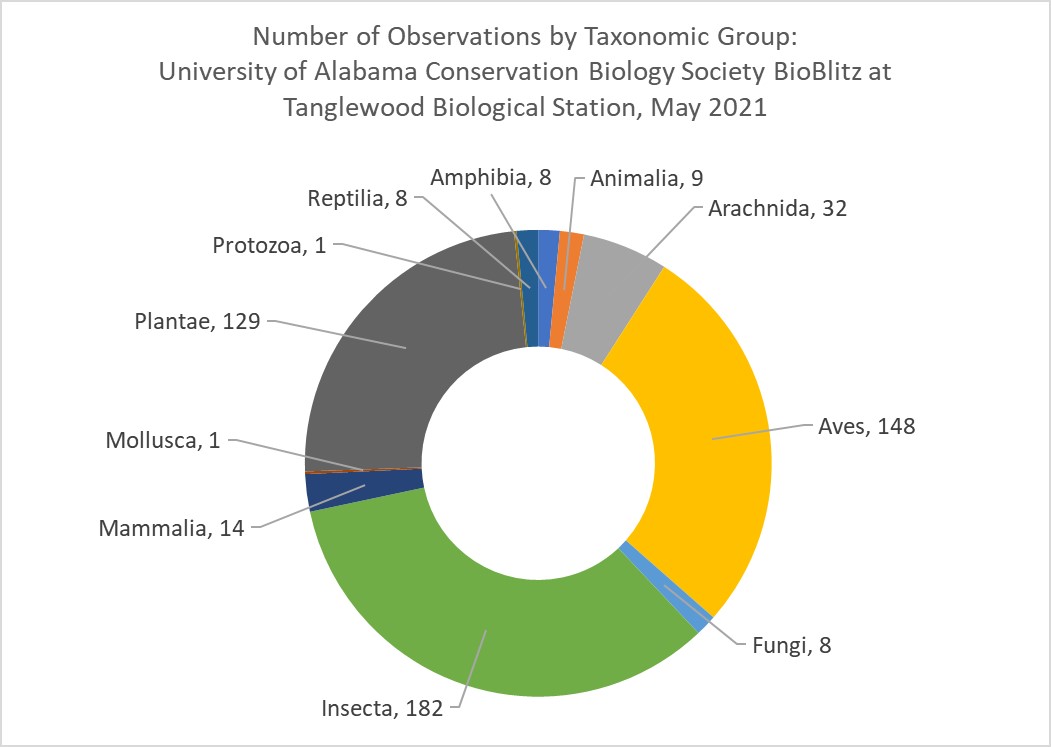 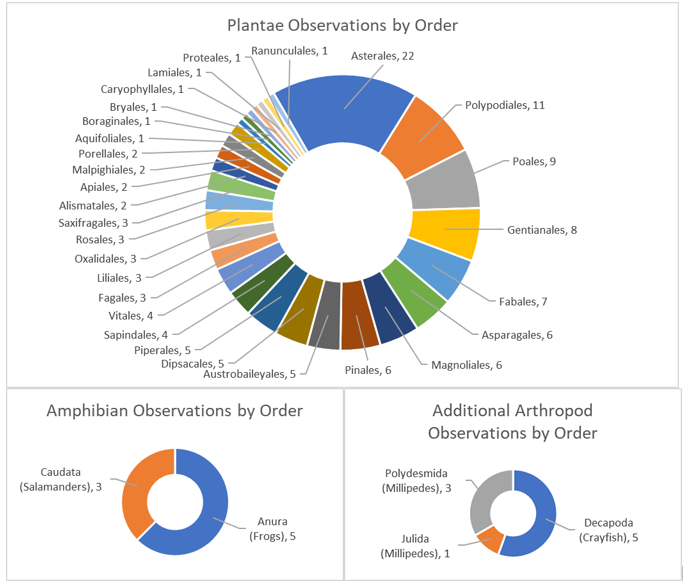 Have you ever wondered where a stream starts?  Well, the answer is much more complicated than one might think!  Stream length changes both seasonally and even year-to-year.  In fact, here in Alabama over 50% of our mapped streams dry on a regular basis! Some years, like during the 2016 drought, more than half of our streams go dry. Delaney Peterson, PhD student in the Jones Ecohydrology Lab, is mapping flowing stream length seasonally during 2021.  To do this, Delaney and a small army of volunteers (see picture below) walk all of Tanglewood’s headwater streams and take measurements every 100 meters.

The Biology Department has initiated a competitive grant program for graduate students to receive summer funding to conduct research at Tanglewood. This award provides three months of summer stipend support for research being performed at Tanglewood (e.g, mesocosm research, field sampling, field observation, etc) during the award period. The 2020 recipients of the award are Jacob Herschberger and Samantha Siomko.

Delaney Peterson, PhD student in the Jones Ecohydrology Lab, installed 14 groundwater monitoring wells across the Tanglewood Biological Station.  The wells will be used to quantify water movement between upland areas and small streams.  This work was is partially supported by the Alabama Water Institute.

UA forest managers conducted a controlled burn across the southern portion of the Tanglewood Biological Station. Fires are an important part of forested ecosystems in Alabama. Understory plants such as wiregrass require fire for flowering, and trees such and pond and sand pine require fire for seed germination. Thus, regular controlled burns are an integral part of forest management strategies.